Five days of celebration. The legends of Ram and Krishna

This is the second and last part of Diwali article. In the << First Part >> we covered 'what is Diwali' and why it is called Festival of Lights. What is the significance of Diwali. Now, in this part 2, we will find out all five days of Diwali celebration and also where it is celebrated in USA.

The most famous legend behind the celebrations of Diwali is about the prince of Ayodhya - Lord Shri Ram. According to the legend, the king of Lanka, Ravan, kidnapped Lord Ram's wife (Sita) from the jungle, where they were staying as per the instructions of King Dashratha, father of Lord Ram. Then Ram attacked Lanka, killed Ravan and released Sita from the custody. He returned to Ayodhya with his wife Sita and younger brother Lakshamana after fourteen years. 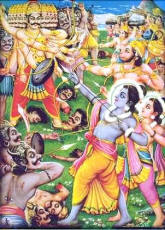 Ram returns to his kingdom on
Diwali day after killing demon Ravana
Therefore, the people of Ayodhyaa decorated their homes as well as Ayodhyaa, by lighting tiny diyas, in order to welcome their beloved prince Shri Ram and Devi Sita. It was the day of 'Kartik Amavasyaa' when they also celebrated the victory of Shri Ram over the King of Lanka, Ravan. Ram is considered the symbol of good and the positive things and Ravan represents the evils. Therefore, Diwali is considered the festival, which establishes the victory of good over the evil. On the night of Diwali, people light diyas, which is again an icon of positive energy to conquer darkness, the is symbol of negative energy.

On this day, goddess Laxmi is worshipped with Ram and Ganesh. Diyas are arranged in special way in the puja place. Every community has it's own way of worship. But everyone in the home wear new cloth for puja, distribute sweets and touch feet out of respect of elders and relatives. Kids enjoy with fire crackers in the road, in the front of house and even inside house ladies burn the lighting crackers. In India there is no restrictions (as yet) to burn fire crackers in the streets. 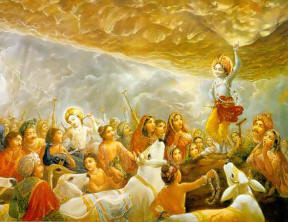 Krishna lifts the Govardhan mountain with
one finger to save villagers from flooding rain
'Govardhan' is a small hillock situated at 'Braj', near Mathura. The legends in 'Vishnu Puraan' have it that the people of Gokul used to worship and offer prayers to Lord Indra for the rains, because they believed that it were He, who was responsible for rainfall for their welfare. However, Lord Krishna told them that it was Mount Govardhan (Govardhan Paevat) and not Lord Indra, who caused rains. Therefore, they should worship the former and not the latter.

People did the same, which made Lord Indra so furious that the people of Gokul had to face heavy rainfall because of his anger. Lord Krishna came forward to ensure their security and after performing worship and offering prayers to Mount Govardhan, he lifted it as an umbrella, on the little finger of his right hand, so that everyone could take shelter under it. After this event, Lord Krishna was also known as Giridhari or Govardhandhari.

Some community celebrated this day as Gudi Padwa (New Year day by Maharashtrians). It is also known as Ugadi in Andhra Pradesh and Karnataka. This festival marks the beginning of the spring season .This festival symbolizes love and devotion between the wife and husband. On this day newly married daughters with their husbands are invited for special meals and given presents.

According to the legends, Lord Yamraj, the God of Death, visited his sister Yamuna on the 'Shukla Paksha Dwitiya' day in the Hindi month of 'Kartik'. When Yamraj reached Yamuna's home, she welcomed him by performing his aarti, applying 'Tilak' on his forehead and by putting a garland around his neck. Yamuna also cooked varieties of dishes, prepared many sweets for her brother and offered all those to Him.

Decoraion of Golden Temple, India
Lord Yamraj ate all those delicious dishes and when he was finished, he showered blessings on Yamuna and gave her a boon that if a brother visits his sister on this day, he would be blessed with health and wealth. This is why this day of Bhayya Duj is also known by the name of 'Yam-Dwitiya'. Thus, it has become a tradition that on the day of Bhai-Dooj for the brothers to visit their sisters' home and offer them gifts. Sisters also make various dishes for their brothers and give gifts to them.

Senate Resolution 299, recognizing the "religious and historical significance of the festival of Diwali," passed unanimously on November 14, 2007 in the U.S. Senate.
Diwali is celbrated in White House every year.
This is just glimpse of what and how of Diwali. There is so much more. If you are planning to travel India. This is the best time to visit and see the color and brightness of life .
Click here for Lakshmi Ji Aarti and downloads .