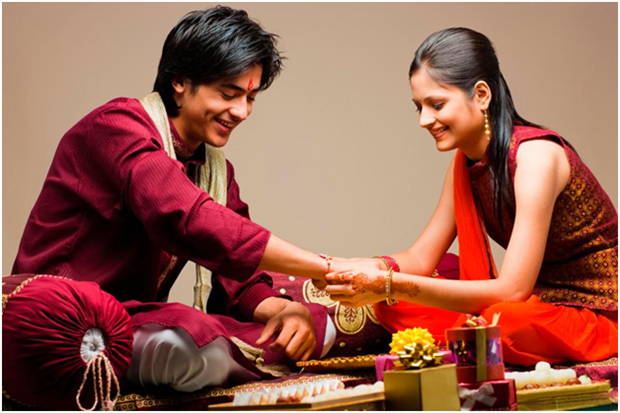 We, the Indians when enters into the latter part of the year, a sense of joy, happiness and anxiety joins us. This is due to the long list of festivals which are waiting for us which not only gave us the chances to meet with our close ones but also provide us various ways and means to understand Indian culture, its integrity and uniqueness. One and the first among them in auspicious RakshaBhandhan aka Rakhi.

In simple terms if we want to understand what it means, the words are clue to it, RakshaBhandhan consists of two words i.e. Raksha which means protection while Bhandhan means bond i.e. “bond of protection& solidarity”. It is the day which symbolizes the sacred relation between a brother and sister. It signifies the bond of love out which comes sense of security and protection.

Rakhi or RakshaBhandhan has various origins to it one famous and acceptable by all is the story from Mahabharata (Indian Epic on lives of Krishna who in turn is incarnation of Indian mythological god Krishna). Once, Lord Krishna hurt his hand while fighting Shishupala, a man who had committed several heinous acts. When this happened, Draupadi, the wife of the Pandava brothers, rushed to cover the wound by tearing a piece of her sari and tying it around Lord Krishna’s hand. In return for her kind gesture, the Lord asked what she would like. Draupadi replied by saying she only desired His Divine presence at every moment of her life. From that moment on, Lord Krishna told Draupadi that He would be with her whenever she called out for Him. Much later, when the Kauravas tried to disrobe her in their court, helpless, she called out to Lord Krishna to save her and in return, the Lord gave her a sari that was infinitely long. As a result, the Kauravas were unable to disrobe her and Draupadi was saved from being dishonored. 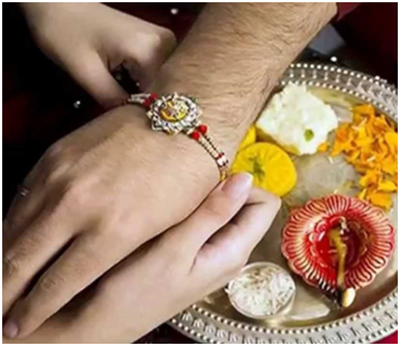 Since it’s signifies bond of love, protection and responsibility between brother and sister, there is a sense of anxiety, jest and enthusiasm especially among sisters toward the preparation. In ancient time queens used to send token of love to their brothers in neighborhood states in form of sweets and valuable items, now we see variation among different regions within India related to celebration but mostly in general it is celebrated by sisters tying Rakhi (threads or amulets) on their brother(s) wrist and pray for their wellbeing. In return brother ritually pledges to protect and take care of his sister under all circumstances. It is one of the several occasions in which family ties are affirmed in India. Earlier it was celebrated strictly between biological brother and sister but now sister even tie Rakhi to distant cousin and well-wishers and even sisters tie among one-another.

Modern India which modern changes have made this festival modern as well with the pinch of love, fun and shopping. Nowadays, sisters awaits for Rakhi desperately so that she can gets valuable gifts, hugs, promises and tempting sweets from brothers. This is the day when brother can’t say no to his sister and should fulfill her wish at any cost. 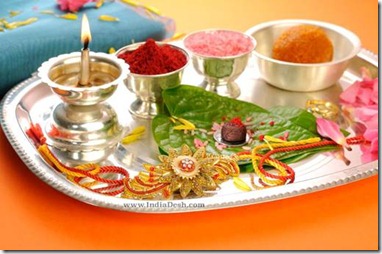 Days or weeks before RakshaBhandhan, women shop for Rakhi or even prepare themselves and brothers also shops for gifts, the gift from the brother can be a simple thoughtful token of love, and may be more elaborate.

Rakhi usually falls on the full moon (Purnima) day of the August month (Shravan) as per Hindu calendar but can differ as per on-going tradition among regional customs. On the morning of RakshaBhandhan the brothers and sisters get together, often in along with their other family members. The ritual typically begins in front of a lighted lamp (diya) or candle, which signifies fire deity. The sister ties the Rakhi on her brother’s wrist. Once done, sister says a prayer for the wellbeing of her brother – good health, prosperity and happiness. This ritual sometimes involves an aarti, where a tray with lighted lamp or candle is ritually rotated around the brother’s face, along with the prayer and well wishes. 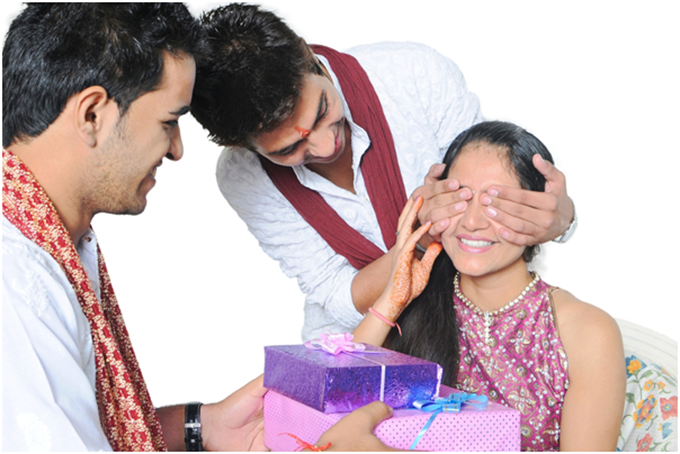 Now with changing times, situation and globalization this esteemed occasion has gained worldwide prominence, it has also served our unified approach for the propagation of the admirable Indian philosophy of “Vasudhaiva Kutumbakam” i.e. whole earth is one family. It has also gained wider scope as being a token for promotion of fraternity and secularism. This festival has being not only limited to Hindu tradition but also has been celebrated among other religion as well e.g. princesses of Mughal emperor Shahjahan, Jahanara and Roshanara used to tie the Raksha sutra on the wrists of their brothers Aurangzeb, Dara Shikoh and Muradbakhsh.

On this special occasion brother/sister would leave no stone unturned to reach and connect back to their brother/sister wherever they may be. Earlier that festival was concentrated to north and western part of India but now, it has travelled beyond India also. Siblings will call, send mail, Rakhi and gifts etcetera to make their love felt by them. Time may have brought changes in the style and manner of celebration but the ritual of the festival remained unchanged. RakshaBhandhan is a perfect day and moment to rejoice and celebrate the undying bond and unceasing love shared by brother and sister. The spirit of the celebration has become much livelier and colorful in the present age.

One thought on “Rakshabandhan–Celebration of brother-sister bond”