What is Holi color festival, how to celebrate the festival. Safety precautions you should take on Holi.

Holi, commonly known as the festival of colors, celebrates both the victory of good over evil and the arrival of spring. It is celebrated on the night of the full moon with great enthusiasm and energy.

Holi is celebrated with various names, and people of different states may be following different traditions. However, what makes Holi so unique and special is the spirit of it remains the same through-out India and even across the globe, wherever it is celebrated. 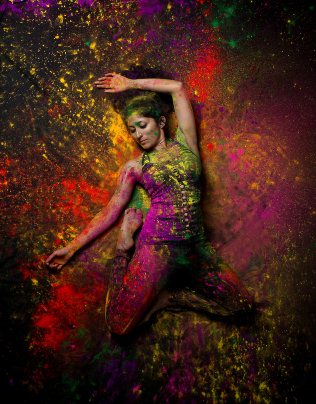 When is Holi celebrated and why

Holi is celebrated on the full moon night of March (Phalgun month in Hindu Lunar calendar). Holi is a day to celebrate good over evil, the arrival of spring, end of winter, and for many a festive day to meet others, play and laugh, forget and forgive, and repair ruptured relationships.

How to celebrate Holi

In India, on Holi day, you will find every one of the streets playing with colored water and powder colors. Everyone is having fun playing with the colors, throwing it on each other and splashing each other with water. Also, another tradition is that on full moon day, people burn a big bonfire. This signifies burning bad spirits and vibes away.

The mythological importance behind Holi centers on Krishna. When Krishna was young, he was poisoned by a Demoness, thus turning him to his dark blue skin color. Later on in his youth, Krishna worried that fair-skinned Radha and the other gopikas (girls) wouldn't like him. Krishna's mother, tired of his desperation, gave him colors to paint Radha's face any color of his choosing. Holi is now celebrated because of Krishna's playful coloring of Radha.

Colors abound in Holi
There is another story behind the bonfire that is burned on full moon night. There was an arrogant king called King Hiranyakashyap, who only wanted people to worship him. However, his son, Prahlad, become an acute devotee of Lord Naarayana (Lord Vishnu). Hiranyakashyap became very mad, and sent his sister, Holika, into a big bonfire with Prahlad. Holika was supposedly born with the power to resist fire, but when she and Prahlad stepped into the fire, she died. Prahlad survived because of his devotion to Lord Vishnu. Holi is celebrated with a bonfire, signifying the burning of the wicked Holika, and the victory of good or evil.

Precautions if you are in India during Holi

In India, during Holi, often people forget the limits, everybody feels it is their right to enjoy and enjoy they do. Songs, dance, drinks, food everything goes in excess when it is time for Holi. It can be said, "Life turns Colourful" when it is time for Holi.
You should avoid walking alone even in the day light and in the main market. Always surround yourselves with 2 to 3 companions. Cover your face and other body parts. Do not argue or fight with the people who put color on you, even if you asked them to not to do so, it will aggravate the situation. Just move-on.

Where is Holi celebrated in Austin, Texas

Holi is celebrated in most of the major hindu temples in Austin. Though it has mythological reasons, Holi is not considered religious festival and everyone is welcome.
In Austin, three main temples, Radha Madhav Dham, Austin Hindu Temple and Sai Temple Cedar Park, celebrate festival on weekends. Check their website for this years date.